Android Runner (AR) is a tool for automatically executing measurement-based experiments on native and web apps running on Android devices.

The following scientific publication gives an overview about the main components, plugins, and configurations of Android Runner (as of 2020): A-Mobile 2020 publication

As visualized below, Android Runner consists of the following components: 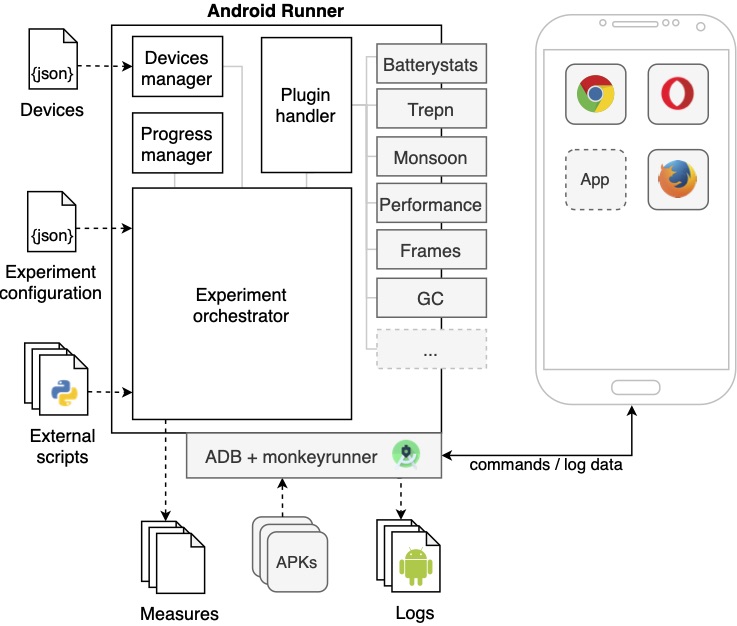 How to cite Android Runner

If Android Runner is helping your research, consider to cite it as follows, thanks!

Setting up environment, installation and dependencies

Instructions can be found here. Instructions for specific plugins are included in the plugins' READMEs.

To run an experiment, run:

Example configuration files can be found in the subdirectories of the examples directory.

A JSON config that maps devices names to their adb ids for easy reference in config files.

Below is a reference to the fields for the experiment configuration. It is not always updated.

type string Type of the experiment. Can be web, native or plugintest

devices_spec string Specify this property inside of your config to specify a devices.json outside of the Android Runner repository. For example:

repetitions positive integer Number of times each application is profiled in an experiment.

clear_cache boolean Clears the cache before every run for both web and native experiments. Default is false.

duration positive integer The duration of each run in milliseconds, default is 0. Setting a too short duration may lead to missing results when running native experiments, it is advised to set a higher duration time if unexpected results appear.

reset_adb_among_runs boolean Restarts the adb connection after each run. Default is false.

time_between_run positive integer The time that the framework waits between 2 successive experiment runs. Default is 0.

devices JSON A JSON object to describe the devices to be used and their arguments. Below are several examples:

Note that the last two examples result in the same behaviour.

paths Array\ The paths to the APKs/URLs to test with. In case of the APKs, this is the path on the local file system.

apps Array\ The package names of the apps to test when the apps are already installed on the device. For example:

browsers Array\ Dependent on type = web The names of browser(s) to use. Currently supported values are chrome, firefox and opera.

profilers JSON A JSON object to describe the profiler plugins to be used and their arguments. Below, an example is found:

Currently, Android Runner contains the plugins listed below, they can immediately be used as for an experiment.

Did you develop a plugin for Android Runner? You can create a pull request in this repository and we will include it!

scripts JSON A JSON list of types and paths of scripts to run. Below is an example:

Below are the supported types:

Instead of a path to string it is also possible to provide a JSON object in the following form:

It is possible to write your own profiler and use this with Android Runner. To do so write your profiler in such a way that it uses this profiler.py class as parent class. The device object that is mentioned within the profiler.py class is based on the device.py of this repo. To see what can be done with this object, see the source code here.

You can use your own profiler in the same way as the default profilers, you just need to make sure that:

To test your own profiler, you can make use of the 'plugintest' experiment type which can be seen here

In case of an error or a user abort during experiment execution, it is possible to continue the experiment if desired. This is possible by using a --progress tag with the starting command. For example:

The original thesis can be found here: https://drive.google.com/file/d/0B7Fel9yGl5-xc2lEWmNVYkU5d2c/view?usp=sharing