Bagan is an experimental framework used to automate the execution, reporting and collection of data for Gradle projects, using Kubernetes.

How to use Bagan

Once you have downloaded this repository you need to set up the bagan_conf.json. You can define different properties like the type of experiments you want to apply, the target repository or the resources you want to use in the Kubernetes environments.

Bagan will be executed with the ./bagan command following the next format:

The execution framework and reporting happen in Kubernetes environment. For each experiment, Bagan will create a Helm Release where it will run the target repository applying the experimentation. To report and collect the information of the build, Bagan will inject Talaiot in the Gradle configuration of the project using InfluxDb as time-series database and Grafana as a dashboard visualization tool.

Bagan can deploy a new cluster or will use an existing cluster to execute the experimentation defined in the main conf file.

The main configuration file is bagan_conf.json. The properties to be configured are:

An Experiment is an Entity that represents a specific state of the target repository. This state is related to a different configuration of the build system or the control version system. Currently, the types of experiments supported are:

Bagan will apply a cartesian product for all the experiments, and each combination will be considered as an element to be tested. In case we want to experiment with jvmargs in the project, we will include:

And the experiments generated are:

We can experiment with different types of experiments, here we are using properties, branches and Gradle Wrapper versions:

The experiments generated are:

Bagan uses modes to identify the environment which Kubernetes will use to set up the configuration and execute the experiments. There are supported three modes:

Commands are the tasks to be executed in the mode selected. There are two main commands groups.

We can group the execution of Bagan in three main stages: 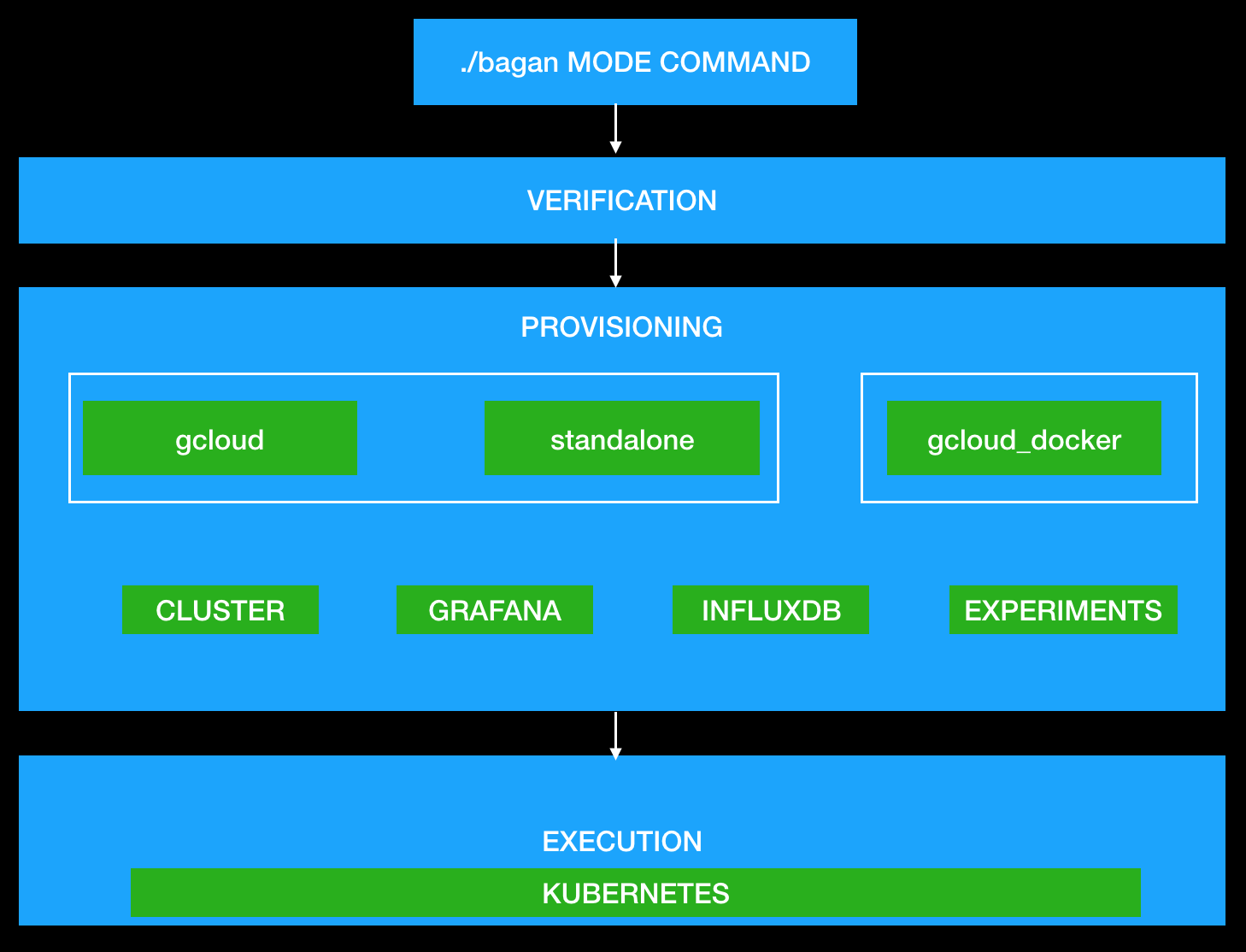 During this phase, Bagan will validate the configuration file bagan_conf.json and the inputs included. It's executed in the host machine and requires jq to perform the validation.

In this phase, Bagan will execute the command included in the mode selected. For gcloud and standalone modes, it will be executed in the host machine. For gcloud_docker will be executed in a docker image(cdsap/bagan-init). Kubectl and Helm will be configured. Depending on the command selected, different actions will be handle. Check commands section.

The execution phase will be driven by the kscript BaganGenerator.kt. This script has three main functions:

Before the execution of the experiments, the deployments of Grafana and InfluxDb are created. The release of Grafana includes a provisioned data source for InfluxDb. Later, a Dashboard is generated with the configuration provided by the bagan_conf.json:

To retrieve the IP, you can use the Bagan command:

User and password by default are admin/admin. Additionally, you can create your panels in Grafana. It follows the same scheme used in Talaiot being the primary points build and task:

Independent of the environment selected, the general infrastructure for Bagan in Kubernetes is: 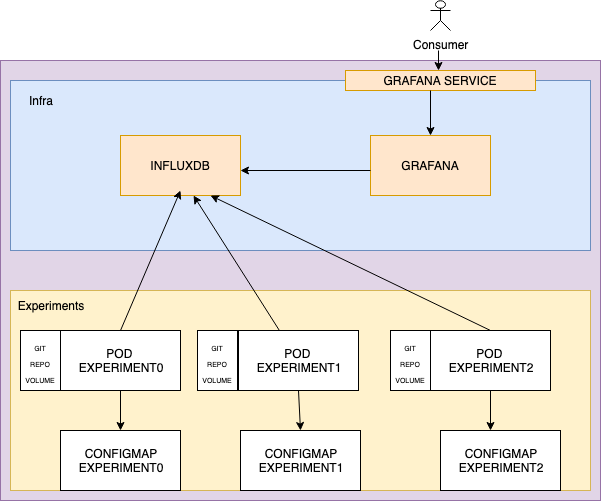 To create the instances of Grafana and InfluxDb, we are using the Kubernetes package manager Helm. Helm is used to create experiments in Kubernetes too. In case of modes gcloud and gcloud_docker, additional Cluster Role Binding objects are created to be used by tiller/Helm. For gcloud and standalone, we can use kubectl as a command-line interface for running commands against Kubernetes clusters.

We can use the Google cloud console, https://console.cloud.google.com, where we have a user interface to manage the cluster:

Every experiment generates a Helm release with this structure:

values.yaml contains the information related to the experiment and the configuration provided in the Bagan conf.

configmapexperimentN.yaml contains the data of the permutation calculated for the experiment:

The execution of the build happens inside the pod created by podexperimentN.yaml. The Docker image used by the pod is cdsap/bagan-pod. This pod is responsible for:

The execution flow is: 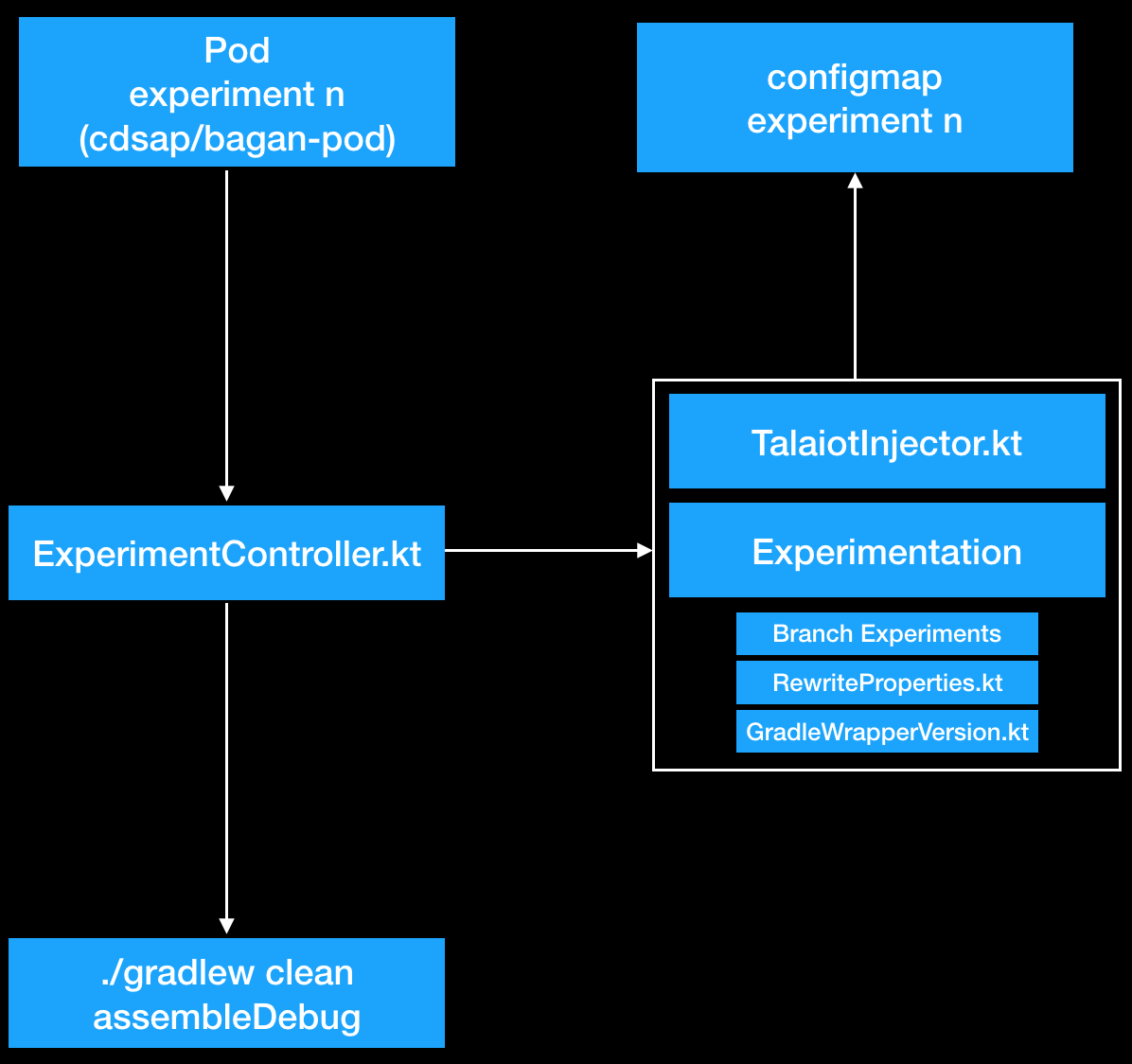 When the Pod is running, it will execute the ExperimentController.kt (using kscript) that starts applying Talaiot in the main Gradle configuration file (groovy/kts):

Later, the ExperimentController.kt will parse the data of the configmap and will apply the different experiments. Note that in the case of Branch Experimentation, the experiment will be applied in the Pod and not in the configmap.

The cost of Bagan

In case you are using Google Cloud as Kubernetes environment, you should consider the impact in terms of cost($$) of the experimentation. Android projects are expensive in terms of memory consumption and creating multiples combinations with not enough powerful machine will cause the failure of the experiments:

Increasing the resources of the machine will help to succeed in the execution of the experiment, but it brings more consumption of resources a.k.a money. Remember that more permutations of the different experiments will generate more Pods. There is no restriction on the machine used in Bagan, for small/medium projects we recommend the n2 series(cost per hour): 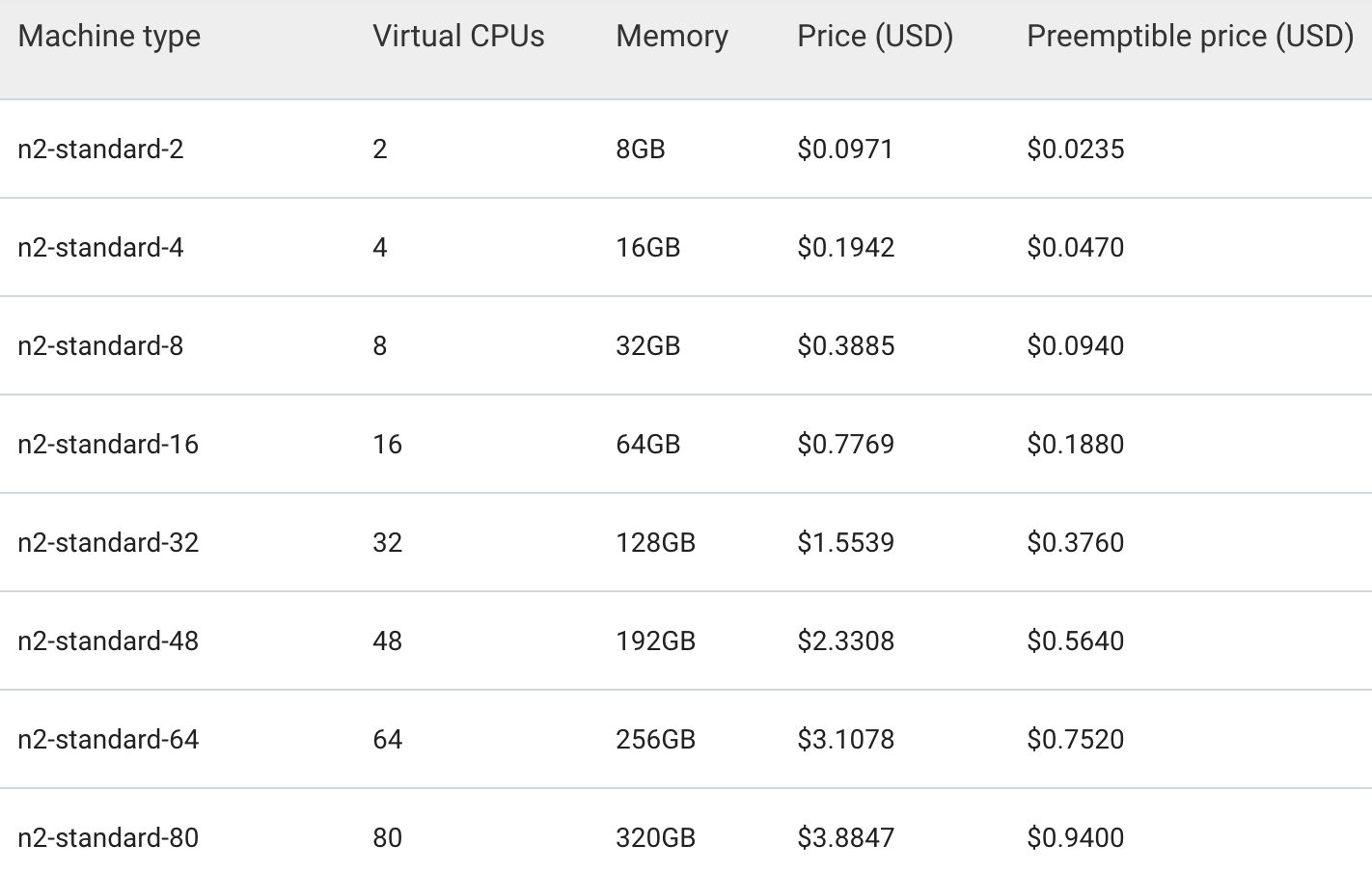 In case you are using Google Cloud only to create the cluster for Bagan, we recommend to remove it after the experimentation and evaluation of the results have finished.

Simple example of a private repository with three modules

Twp experiments of Type Gradle Properties will be generated:

16 experiments of Type Gradle Properties will be generated:

We don't appreciate on Plaid project significant different using properties like kapt.incremental.apt and kapt.use.worker.api. However, you can notice the benefits of using caching on the Gradle Builds. 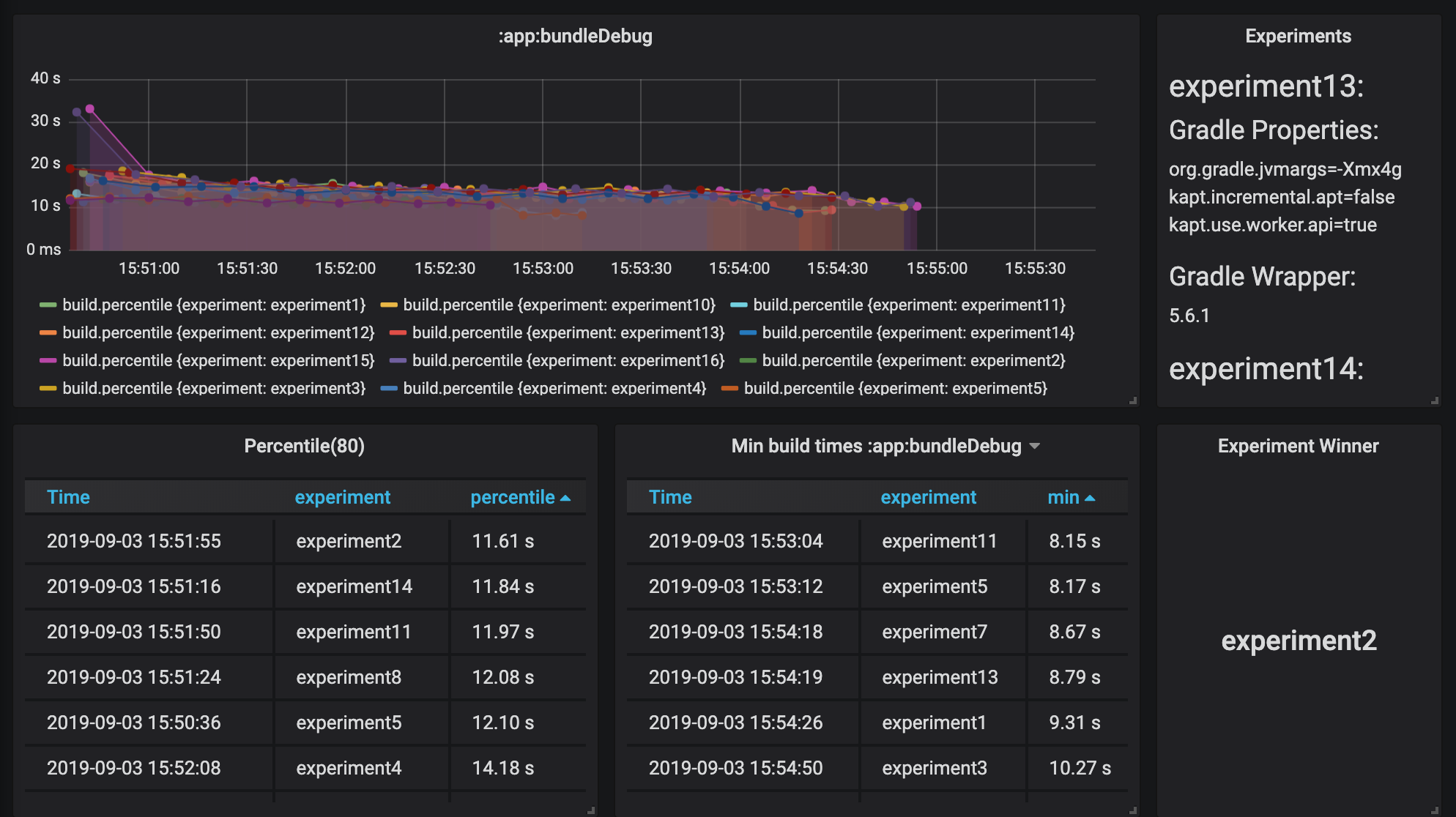 Bagan is open source and you can contribute or adapt it under your requirements. The folder structure of the project is:

Bagan Generator is the Kotlin project with two main applications:

We are using kscript to run the Kotlin classes. We need to transform the way we import the dependencies to be used in kscript. The task convertFiles(depending on build task) will convert the imports in a kscript format.

It contains the Docker images for bagan-init and bagan-pod. It includes the binaries generated by the baganGenerator in the deployment step. In case you want to provide your own images, you can set the values on the deployment file(deploy/deployment.sh):

It contains the Grafana and InfluxDb charts. Grafana contains the provisioned data source configuration for InfluxDb. Also includes the default dashboard that will be updated when experimentation will be executed.

It contains the bash scripts related to the verification and provisioning phase. For each mode, there is available one command executor.

Bagan is an ancient city and a UNESCO World Heritage Site located in the Mandalay Region of Myanmar. If you have the opportunity, visit Bagan: https://en.wikipedia.org/wiki/Bagan