Quicksql is a SQL query product which can be used for specific datastore queries or multiple datastores correlated queries. It supports relational databases, non-relational databases and even datastore which does not support SQL (such as Elasticsearch, Druid) . In addition, a SQL query can join or union data from multiple datastores in Quicksql. For example, you can perform unified SQL query on one situation that a part of data stored on Elasticsearch, but the other part of data stored on Hive. The most important is that QSQL is not dependent on any intermediate compute engine, users only need to focus on data and unified SQL grammar to finished statistics and analysis. 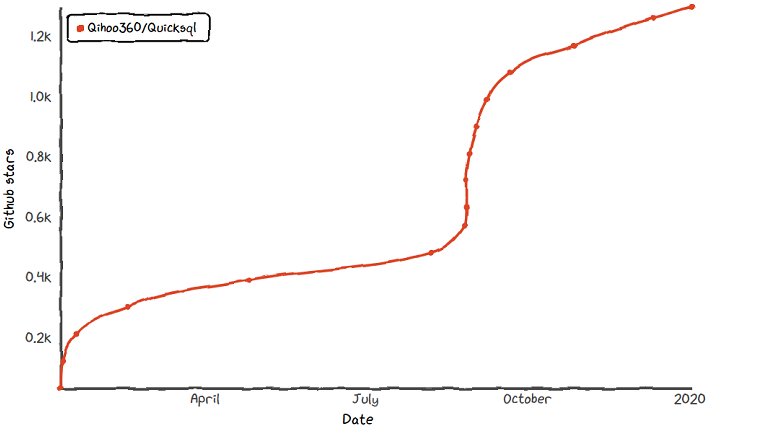 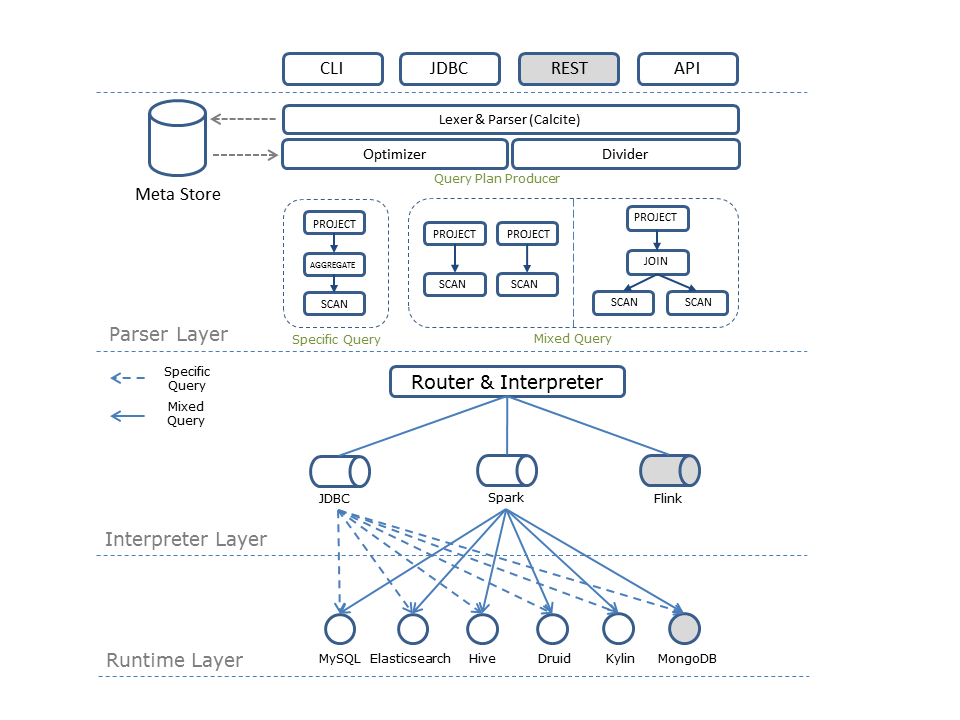 In the vast majority of cases, we expect to use a language for data analysis and don't want to consider things that are not related to data analysis, Quicksql is born for this.

The goal of Quicksql is to provide three functions:

1. Unify all structured data queries into a SQL grammar

Even an aggregation query:

You won't be annoyed again because the brackets in the JSON query can't match ;)

In the past, the same semantic statement needs to be converted to a dialect for different engines, such as:

In Quicksql, relational databases no longer have the concept of dialects. You can use the grammar of Quicksql to query any engine, just like this:

Consider a situation where you want to join tables that are in different engines or are not in the same cluster, you may be in trouble.

3. Choose the most appropriate way to execute the query

A query involving multiple engines can be executed in a variety of ways. Quicksql wants to combine the advantages of each engine to find the most appropriate one.

For instructions on building Quicksql from source, see Getting Started.

If you find any bugs or have any better suggestions, please file a GitHub issue.

And if the issue is approved, a label [QSQL-ID] will be added before the issue description by committer so that it can correspond to commit. Such as:

If you are interested in Quicksql, you can download the source code from GitHub and execute the following maven command at the project root directory：

If you are planning to make a large contribution, talk to us first! It helps to agree on the general approach. Log a Issures on GitHub for your proposed feature.

Fork the GitHub repository, and create a branch for your feature.

Develop your feature and test cases, and make sure that mvn install succeeds. (Run extra tests if your change warrants it.)

Commit your change to your branch.

If your change had multiple commits, use git rebase -i master to squash them into a single commit, and to bring your code up to date with the latest on the main line.

Then push your commit(s) to GitHub, and create a pull request from your branch to the QSQL master branch. Update the JIRA case to reference your pull request, and a committer will review your changes.

The pull request may need to be updated (after its submission) for two main reasons:

In order to update the pull request, you need to commit the changes in your branch and then push the commit(s) to GitHub. You are encouraged to use regular (non-rebased) commits on top of previously existing ones.