Coworker is a delayed work runner built for JVM Based languages, written in kotlin. Coworker started off as an experiment as bringin coroutine ideas to background work. Allowing you to work on something else if you're say waiting for an external system.

From there Coworker than adopted ideas specifically from InstJobs which is a ruby based delayed work runner that has several nice features. Specifically it brings over the ideas of:

Currently Coworker only has support for PostgreSQL DBs. The biggest reason for this is due to: LISTEN/NOTIFY. However since postgres has these features other postgresql only queries have been written that make the workmanager code more efficient.

As for checking if work are still running, currently the method of doing this is built into Consul service checks. Although there is nothing unique to consul being used here per say, other architectures are not supported due to familiarity. If you'd like to see something like zookeeper support please file a PR!

Setting up coworker is similar to other Java dependencies. The only thing to be warry of is Migrations. Coworker leaves the job of creating the SQL tables up to the user so they can use whichever sort of framework/deployment method they want for migrations.

You can find all migrations in our src/main/resources/migrations/ folder. The naming of migrations is as follows: MigrationVersion_MigrationName_DatabaseType. So you should be able to identify which migrations should be applied in which order, and what database they're for.

Coworker is available in the maven central repositories so you can just add it to your dependencies:

There are some basic example jobs in: bench/coworker/. Specifically we have three job types:

NOTE: Bencmarks were done on the following scenarios:

"Job Box": t3.large instance in AWS in us-east-1 deployed in a VPC.

NOTE: The Graph was generated using the plotd tool 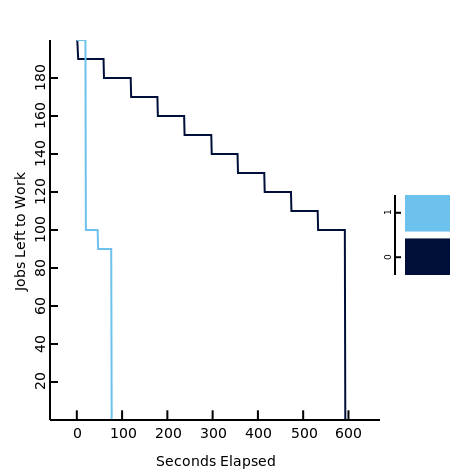 In this graph "1" is really the Coworker Executor, and "2" is Jesque. As you can see, Coworker finishes it's work pool in about 13% of the time as Jesque!

But How Real to Life is this?

Coworker performs so much faster than Jesque for one simple reason. Yielding. Since Coworker is able to yield it can "kick-off" all those remote jobs, and continue other pieces of work while it waits for those jobs to be ready again. Meanwhile Jesque has no concept of yield. So it gets all 10 workers stuck waiting for the remote job to finish after a minute.

If it's just a speed of queueing jobs that do nothing jesque will always be faster because Redis is so much faster than postgres. That being said these sorts of tests are completely not true to life since your worker will actually be doing work.

Obviously a performance test will never be able to fully tell you how your application will run, since every application is different. However generally the two biggest benefits you get from using Coworker will be:

If this two cases do not fit you Coworker may still be faster than your delayed work runner currently. That is if you're using SQL as the backing store, or an unoptimized redis store.