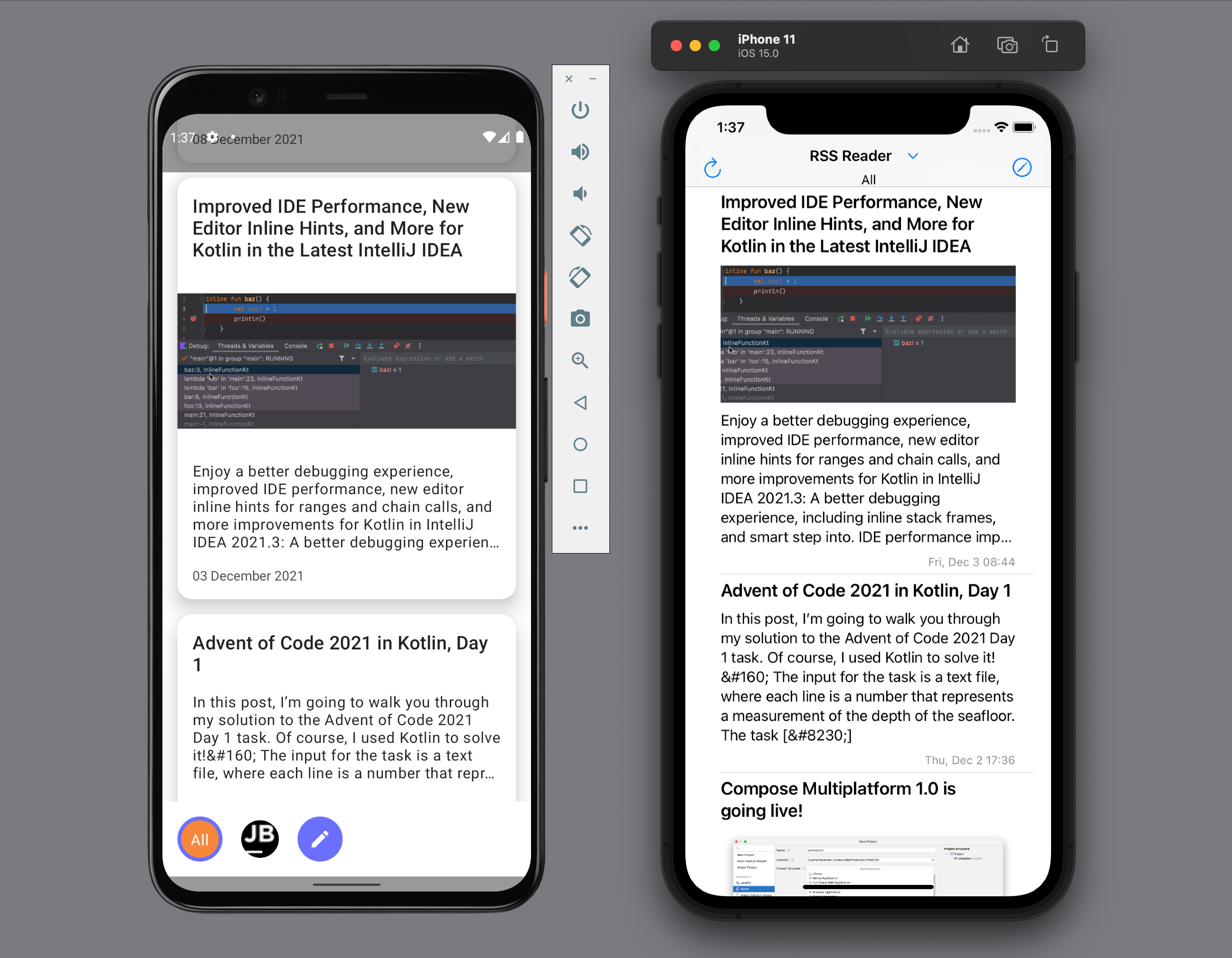 ​ ​ This is an open-source, mobile, cross-platform application built with Kotlin Multiplatform Mobile. It's a simple RSS reader, and you can download it from the App Store and Google Play. It's been designed to demonstrate how KMM can be used in real production projects. ​ ​

​ This repository contains a common Kotlin Multiplatform module, an Android project, and an iOS project. The common module is connected with the Android project via the Gradle multi-project mechanism. For use in iOS applications, the shared module compiles into a framework that is exposed to the Xcode project via the PackForXcode Gradle task. This framework connects to the Xcode project that builds an iOS application. ​ You can achieve the same structure by creating a project with the KMM Plugin project wizard or cloning the basic sample project. ​

​ Kotlin Multiplatform Mobile is a flexible technology that allows you to share only what you want to share, from the core layer to UI layers. ​ This sample demonstrates sharing not only the data and domain layers of the app but also the application state: ​ 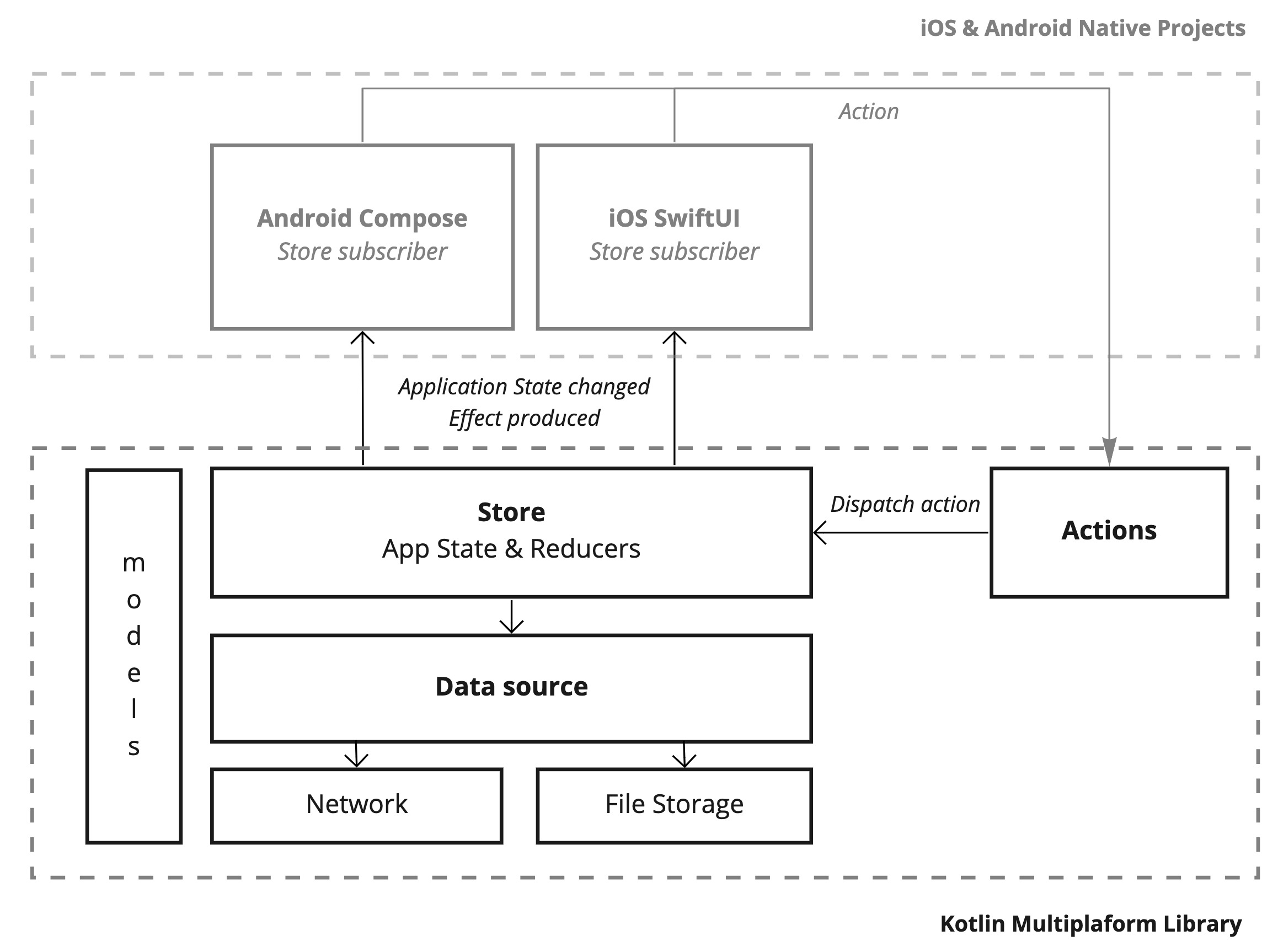 ​ There are two types of data sources. The network service is for getting RSS feed updates, while local storage is for caching the feed, which makes it possible to use the application offline. Ktor HTTP Client is used for making API requests. Kotlinx.serialization is used to serialize feed data and store it locally with MultiplaformSettings. This logic is organized in the shared module of the com.github.jetbrains.rssreader.core package. ​ ​

​ The Redux pattern is used for managing the application state. The simplified Redux architecture is implemented in the shared module. The Store class dispatches the actions that can be produced either by a user or by some async work, and generates the new state. It stores the actual state and facilitates subscription to state updates via Kotlin's StateFlow. To provide additional information about state updates, the Store class also produces effects that, for example, can be used to display this information via alerts. This logic is organized in the shared KMM module of the com.github.jetbrains.rssreader.app package. ​

​ The UI layer is fully native and implemented using SwiftUI for iOS and Jetpack Compose for Android. ​ On the iOS side, the Store from the KMM library is wrapped into the ObservableObject and implements the state as a @Published wrapped property. This publishes changes whenever a dispatched action produces a new state after being reduced in the shared module. The store is injected as an Environment Object into the root view of the application, and is easily accessible from anywhere in the application. SwiftUI performs all aspects of diffing on the render pass when your state changes. ​ For subscribing to state updates, the simple wrapper is used. This wrapper allows you to provide a callback that will be called when each new value (the state in our case) is emitted. ​

​ ✅ Platform-specific API usage. RSS feeds usually only support the XML format. The kotlinx.serialization library currently doesn't support parsing XML data, but there is no need to implement your own parser. Instead, platform libraries (XmlPullParser for Android and NSXMLParser for iOS) are used. The common FeedParser interface is declared in the commonMain source set. Platform implementations are placed in the corresponding iOSMain and AndroidMain source sets. They are injected into the RSSReader class (the KMM module entry point) via the create factory method, which is declared in the RSSReader class companion object.