The inspiration for this project came from this tweet. 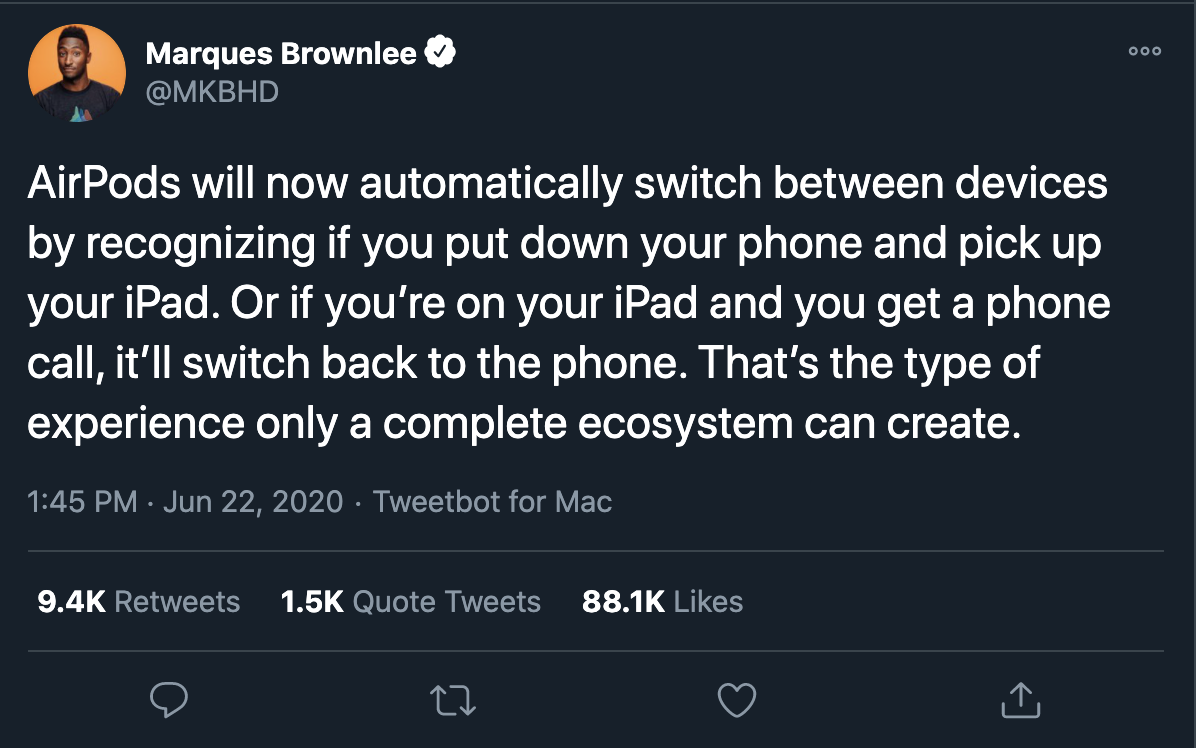 A core tenet of the Apple camp is that their complete ecosystem makes every product "just work". This is a truism: Apple isn't plagued with fragmentation issues like other platforms. But replicating these functionalities on other platforms isn't rocket science. 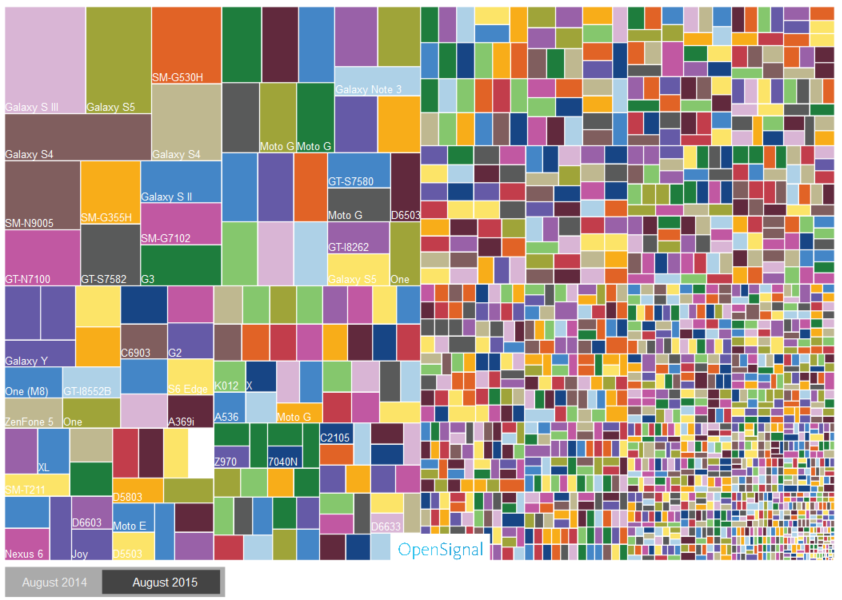 PCAS (Peripheral Connection Augmentation System) artificially augments a Bluetooth peripheral maximum number of concurrent connections. Based on user-initiated events and hardware configurations PCAS automatically connects/disconnects a profile on a peripheral. PCAS can also multiplex to a single sink: For example, on Android, this brings the theoretical maximum audio connections to 30 (the maximum allowed AudioTrack instances).

A single user with multiple hosts no longer has to manually connect/disconnect each peripheral. PCAS does this automatically. This works even on cheap peripherals that don't support multiple concurrent connections natively. Example scenarios:

You can find prebuilt binaries in the releases section.

PCAS is designed to be simple and "just work". The only initial setup required is selecting a peripheral for each service of interest. 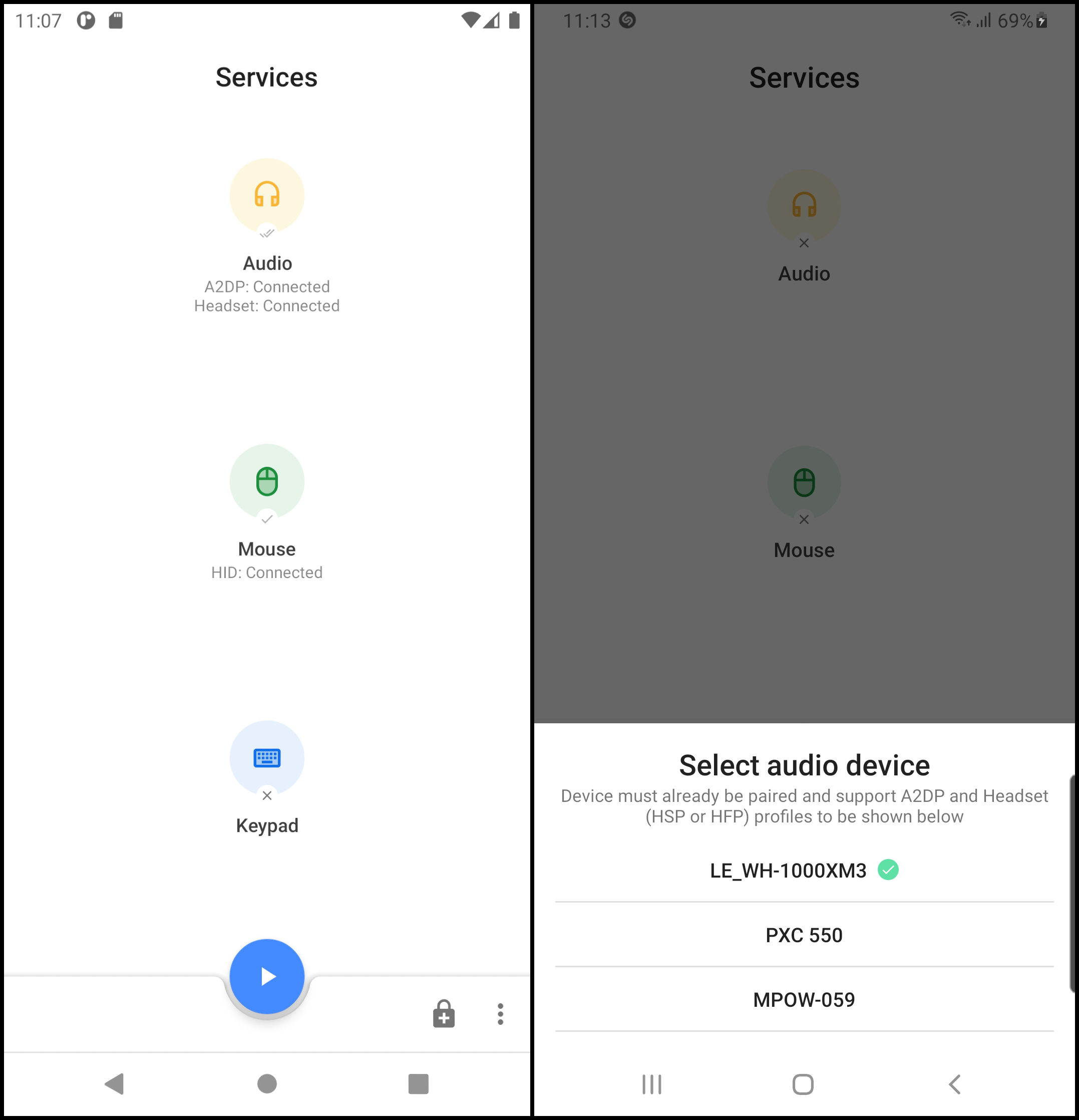 All hosts must be on the same LAN. E2E encryption is provided but optional (disabled by default). To enable E2E encryption, a key needs to be created and shared with the relevant hosts. 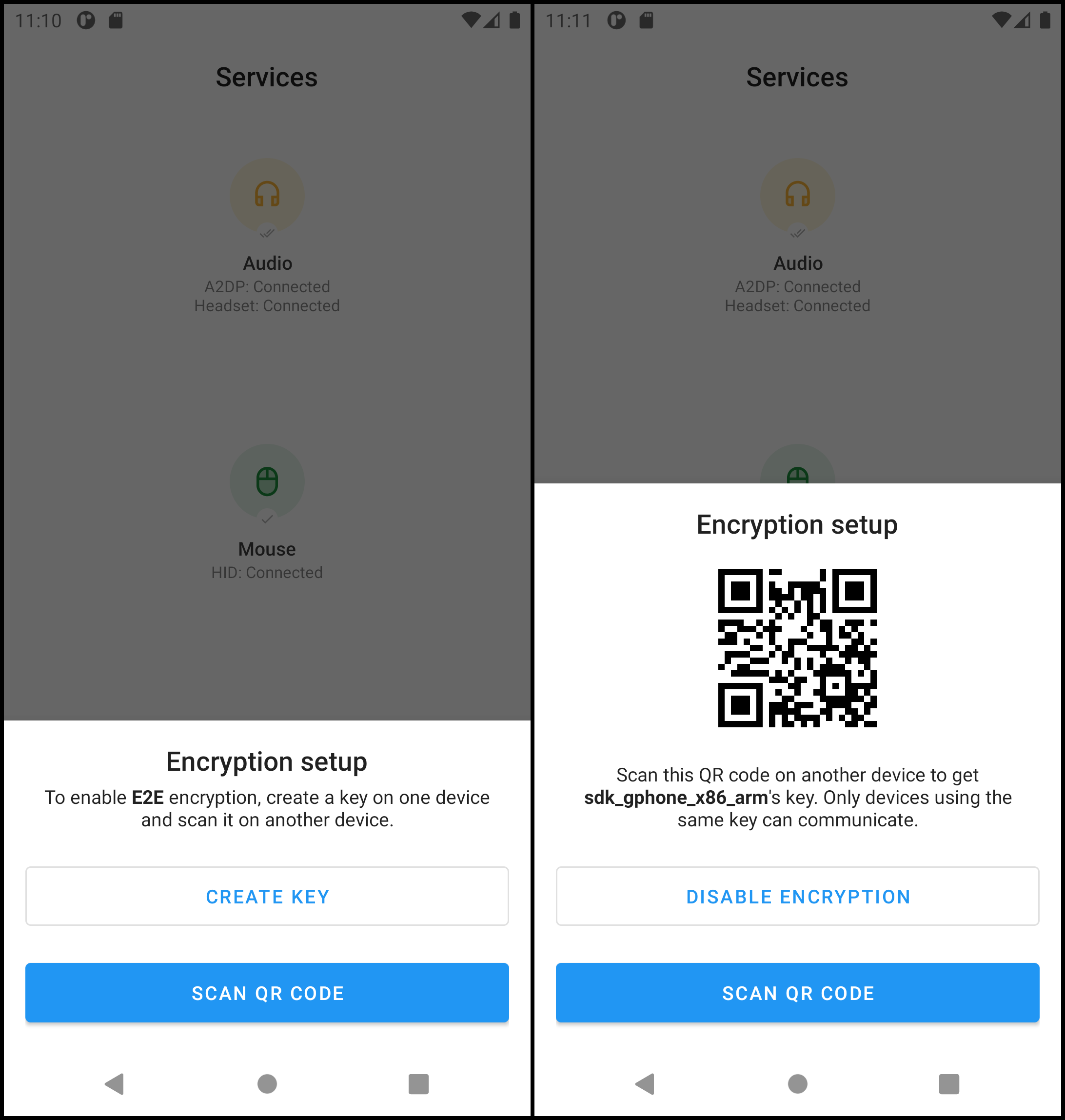 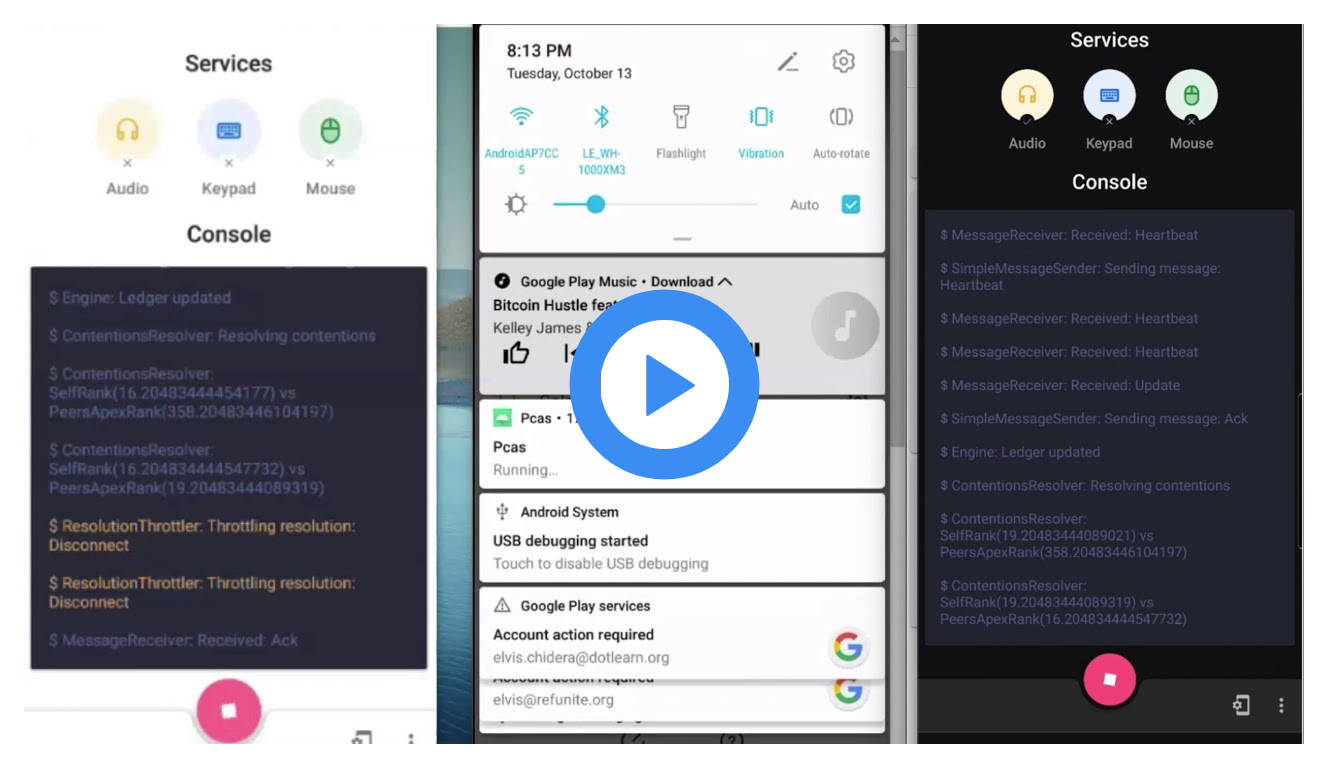 Building PCAS for all platforms is hard, but the underlying concept is quite simple:

This base layer provides a framework for fast, best-effort, zero-configuration, & E2E encrypted communication among devices within proximity.

This allows a host to be able to efficiently & securely send and receive messages from other nearby devices without any upfront configuration.

The "unreliable" prefix is misleading, just like when people say UDP is unreliable. This layer is just as reliable as the network stack below it; No additional reliability guarantees are provided.

The transport data unit is a parcel. Parcels are just opaque byte buffers.

This layer is made of three core components:

All hosts can send a parcel to the PCAS multicast group and can join the group to receive parcels. The local IP addresses of discrete hosts are not required. The multicast configs can be found in the TransportConfig class:

This channel uses IP unicast to offer a high-bandwidth point-to-point communication. This is used for data streaming as multicast has a lower data transfer rate.

This component adds E2E encryption to the two channels above. Encryption is optional and is only activated when an encryption key is generated or shared.

Data is encrypted with AES in GCM mode with no padding. A random initialization vector is used once per message and prepended to the head of a parcel. I won't go into details here as there are lots of good material on AES encryption on the internet: like this one.

An interface is created for the 3 components above in the common module which is implemented natively on each platform.

This layer is broadly split into two:

A ledger is just a simple in-memory local database made up of blocks. Blocks represent the current state of the active hosts in a network. Each block is uniquely identified by a 4-tuple (service, profile, owner, peripheral).

"immutable" isn't technically correct. Blocks can be overwritten ONLY by their owner. Any host can prune their ledgers to remove blocks from inactive hosts. 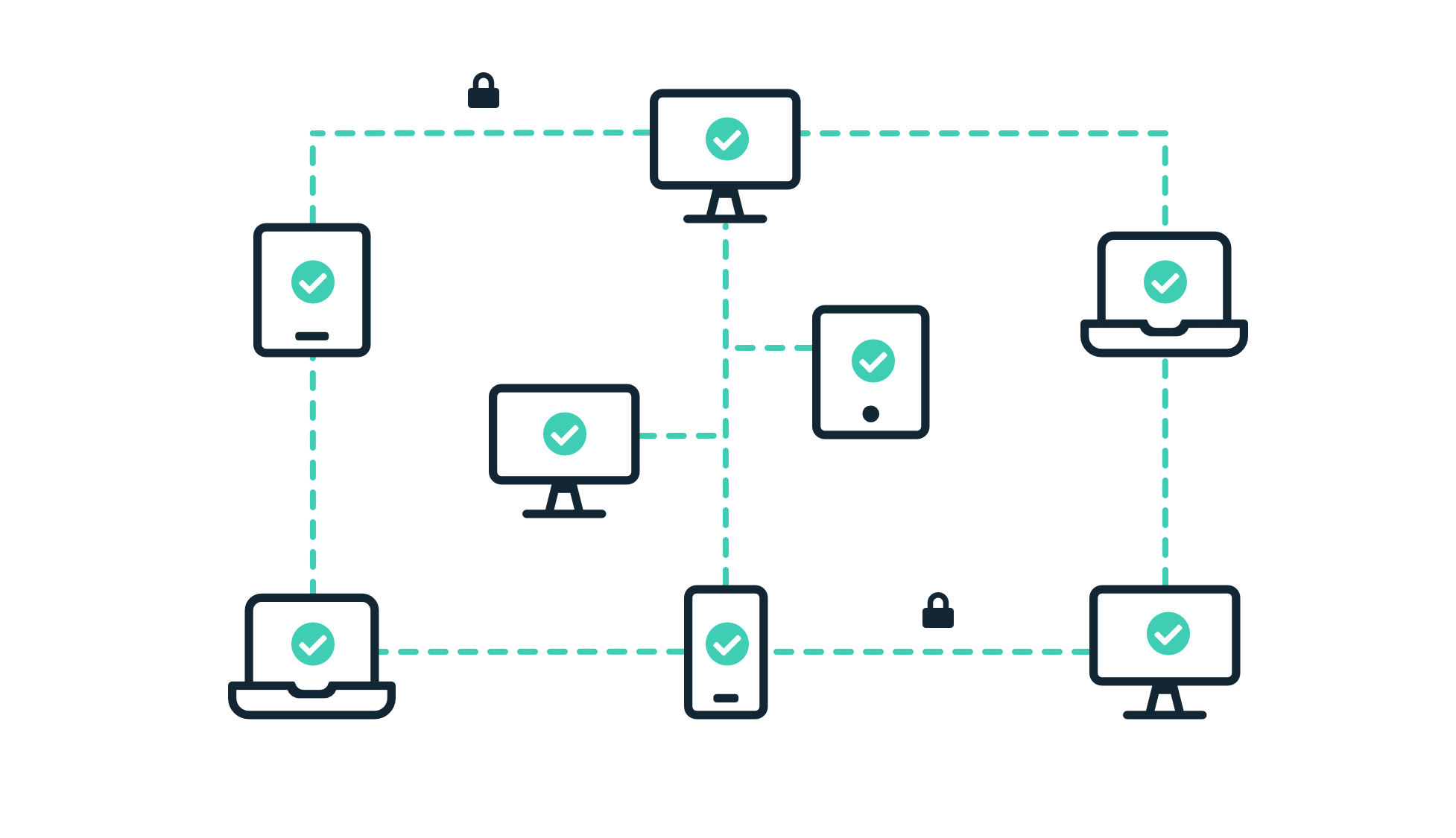 A resilient multicast protocol is built on top of the transport layer. There are three types of messages:

Each host maintains its local ledger. The network protocol guarantees that eventually, all ledgers will be consistent.

Currently, only Update messages are classified as essential.

Heartbeat messages are used as a form of NACK). A host detects synchronization issues from heartbeats and resends its current blocks.

While heartbeats are effective, the interval is too long to be relied on primarily for a highly interactive system like PCAS.

Reliable multicasting is an interesting problem. I explored two strategies:

Blindly resend essential messages x times with a delay of y + random jitter on each attempt.

Let's consider a simple model. If the probability of successfully delivering a message is fixed at 0.50. Assuming each attempt is independent, there is a 0.97 probability that at least one message gets delivered in 5 attempts.

(b is a Bernoulli random variable)

(z is a Binomial random variable)

In practice, delivery probabilities aren't fixed and attempts are not independent. Despite the shortcoming of this strategy, it has the following benefits:

This strategy only sends fewer messages (more efficient) than the redundant strategy when the number of peers in a network is less than x. Some issues with this strategy:

I initially went with ACKs but will be using the simple redundant strategy instead.

The network protocol data unit is a Message. Messages are marshaled to the Protobuf format and passed to the transport layer. The inverse happens when a message is received.

When two or more hosts use the same 3-tuple(service, profile, peripheral), a contention occurs. Even if a host doesn't actively require a profile, it can still contend with another host for that profile.

This is the meat or vegetable (for my vegetarian friends) of the system.

A Bluetooth profile is a specification regarding an aspect of Bluetooth-based wireless communication between devices. It resides on top of the Bluetooth Core Specification and (optionally) additional protocols - source

Recap: With A2DP you can only listen but with higher audio quality. With headset profiles, you can talk and listen, but at a lower quality. Next time you are playing a song while a call comes in, observe how the audio quality drops.

Each time a change is made to the ledger, a resolver looks at all the current contentions and resolves them.

Resolutions are derived using a rank associated with each block.

The rank is an estimate of the current importance of a block. Based on ranks, a contention object is created for each block a host has.

The contention object is then used to derive a resolution.

Currently, only audio services are supported. Provision has been made to easily add other types of services.

All services have two key integrants:

Blocks are built from host state information. The relevant audio states are the current audio usages and the current peripheral bond state.

Each time a host state changes, a new block is created. The ledger layer listens for these changes and automatically updates the local ledger and sends the blocks to remote peers.

Each service gets to handle all resolutions from the resource allocation layer. For audio, this is actually where we connect or disconnect the audio profiles on a peripheral. A service can also choose to support streaming, in which case it will also handle that resolution here.

State of the union

Why use IP Multicast?

Multicast has issues: It requires all devices to be on the same network and it's blocked by some routers. PCAS was designed to be used in a "home network" where these issues are usually nonexistent.

I explored 2 other possible technologies:

Wi-Fi Aware and Wi-Fi Direct were not considered due to power consumption concerns. Google Nearby service was considered but quickly eliminated due to some unacceptable limitations.

This is easy using a service like FCM (it would be similar to Google Nearby Messaging API without the proximity part).

FCM and other push messaging services work using long-lived TCP sockets. A TCP socket on the device waits in accept mode on a Google server.

BLE devices can broadcast advertisement packets unidirectionally. I will do a quick overview of BLE advertisement. You can read the Bluetooth Core Specification v4.0 for more, or scroll to the pros & cons section to understand why it wasn't picked.

Data is transmitted within a channel using Frequency Shift Keying.

The data rate is 1 Mbps (supporting 2Mbps on Bluetooth 5.0).

BLE is robust, using frequency hopping to work around interference.

BLE uses 3 dedicated channels for advertising: 37, 38, 39 (channels are zero-indexed). As can be seen in the image below, these channels are spread across the 2.4GHz band to minimize interference problems.

A relevant study: Coexistence and Interference Tests on a Bluetooth Low Energy Front-End.

In a nutshell: A peripheral device broadcast advertisement packets on at least 1 of the 3 channels, with a repetition period called the advertisement interval.

A scanning central device listens on these channels to detect advertisement packets. 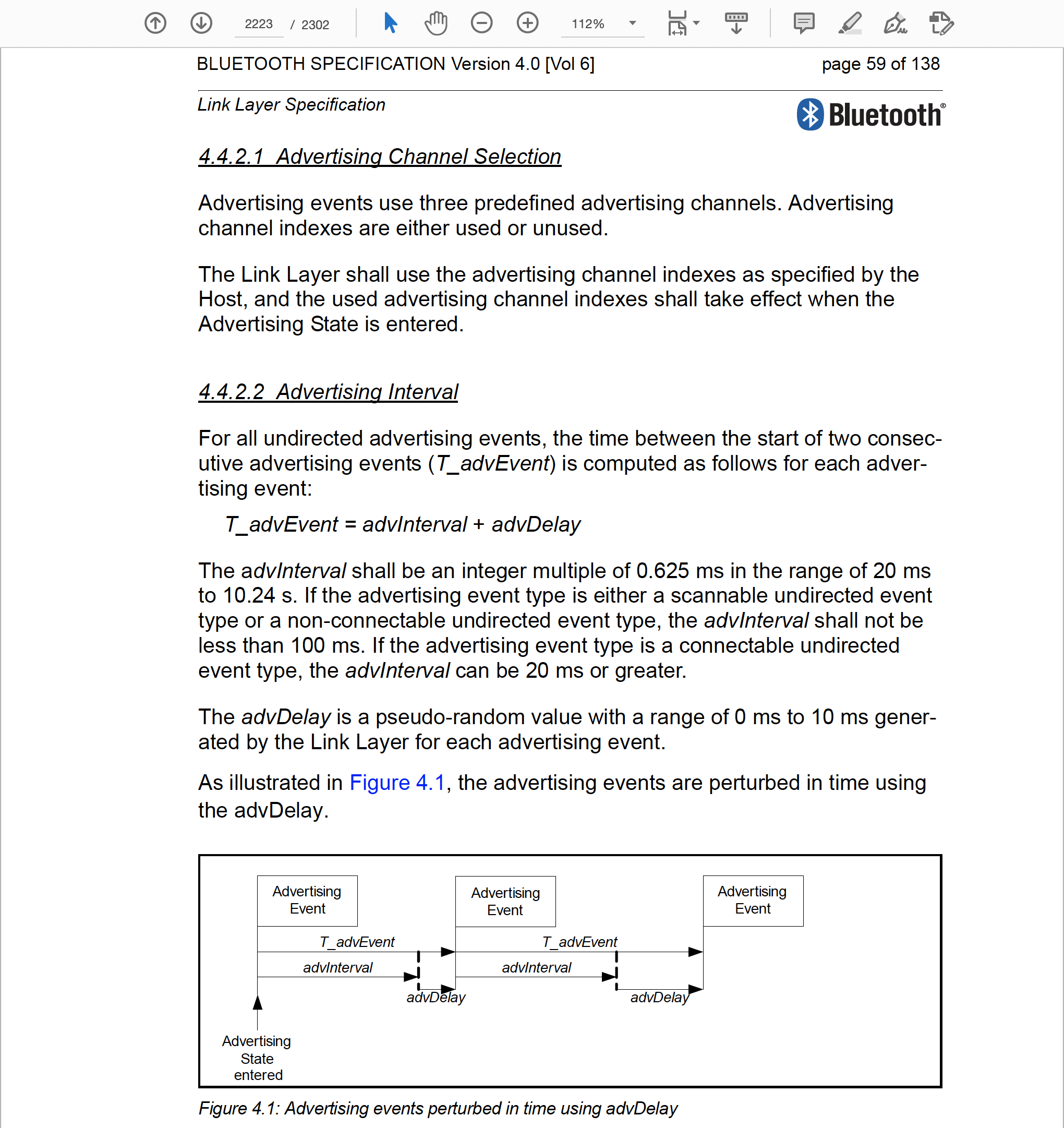 A scanning device listens on the advertisement channels for a duration called the scan window, which is repeated every scan interval.

We can use the three parameters: advertising interval, scan interval, and scan window to build a probabilistic model for discovery latency. Any such model will be practically flawed without considering the environment where devices will likely be used in.

Have a look at this Android power consumption test.

A study by beacon software company Aislelabs reported that peripherals such as proximity beacons usually function for 1–2 years powered by a 1,000mAh coin cell battery. 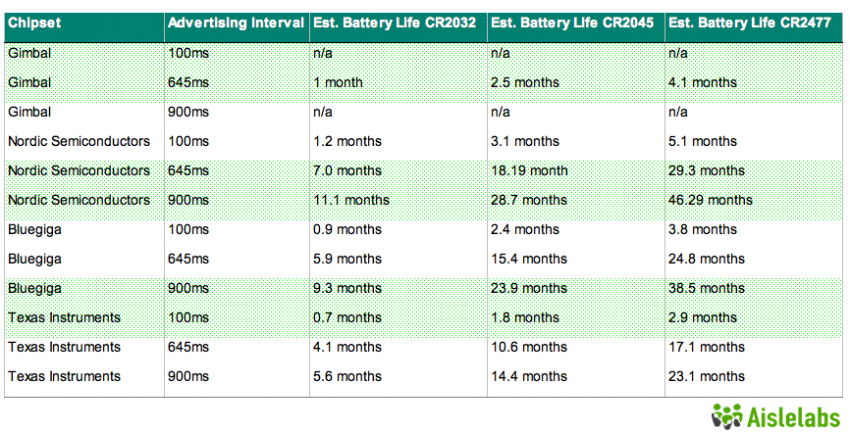